I’m actually more of an X-Factor girl myself but when I heard about the opportunity to attend an audition for America’s Got Talent in Newark I couldn’t pass it up. I’ve been on shows before in college, I was on Total Request Live once and went to The Daily Show but never anything talent/contest related.

So the taping was at a performance art center in Newark and I was a little bit worried about transportation, turns out it was a piece of cake. Two $5 NJ Transit tickets to Newark at Penn Station and a 20 minute train ride later, boom Adrienne and I are in Newark. Adrienne’s friend Aileen picked us up from there but the center was pretty close to the NJ Transit station.

I must say getting in was pretty smooth, we were barely online for five minutes. We got our tickets, showed our bags and then headed to our seats. We unfortunately were in the third ring and probably won’t get any TV coverage but it was still fun. They had an Audience Manager/Producer that was pretty on point and kept everyone lively  practicing how to clap and cheer. One thing that I actually was pretty surprised about was how many kids were at the taping. The audience was definitely mixed but it just so happened the area that I was located in had a ton of kids, at least everyone was well behaved.

I had a great time with the girls even though there was a lot of waiting time but I must say no one really wowed me. They had about five singers, two comedians, three dancers, a psychic act and a magic show act. I really wanted to see a dog/dance act but that didn’t happen. Only a few got through to the next round….so there may or may not be a cool magician act or weird dance act going to the next round but those were my favorite ones =).

Here are some shots… 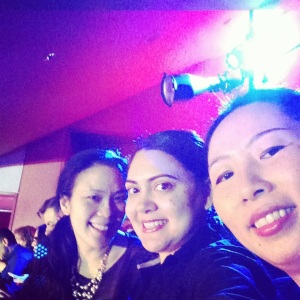 Adrienne, Me and Aileen taking a selfie

Waiting to be entertained